There's a first time for everything..

This month we've had alot of firsts.. not all of them good!
DH chased a beautiful young goanna that was half way up the private road we live on. He's always been very careful with them and only ever gotten a scratch. This time he got bitten, hard. Actually it was more like a chew! Not one to hold a grudge, he showed him off before letting him go (click to enlarge, you can see the BLOOD from DH's hand dripping down the goanna's leg (lace monitor) 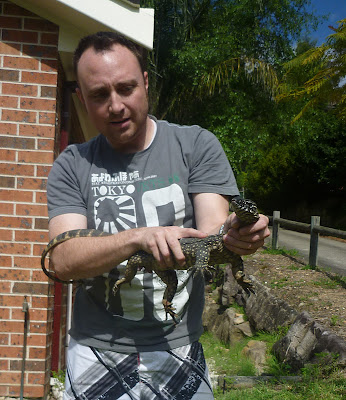 We made Halloween lanterns ( a week early). The bright orange imported pumpkins were $4 a kilo!! So we got a rock melon and later a watermelon. DS1 had a great time and I sat on the floor with the melon heads each night with the candle on in their room as they dropped to sleep. 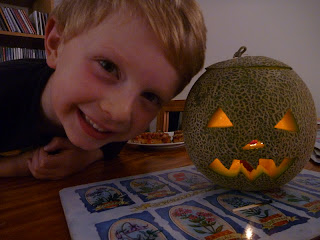 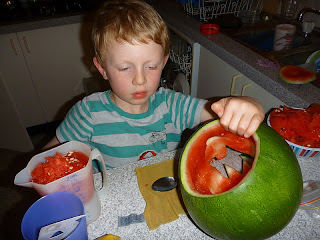 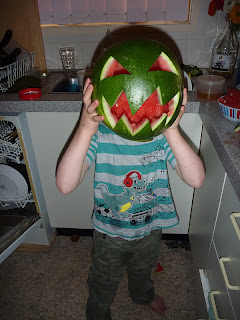 No room in the fridge so they didn't last long.
Another first was home made foccacia pizza.. I really should have halved the dough, it was ALOT of dough. But super fluffy (even for my stone ground, light sift, whole grain flour) and really yummy! A definite hit. 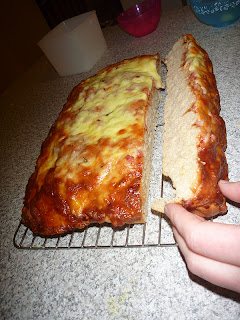 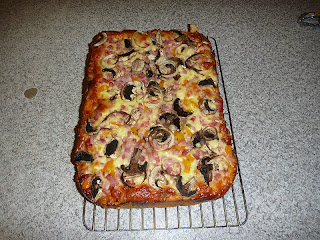 Here's DS2 with his and my first try at making pasta through my (flippin' fantastic) juicer. Again, it was that stoneground flour.. so it wasn't great in this recipe but just for play was great. DS2 loved it and I wished that I'd started the kids on wholegrain pasta from birth (they love quinoa/barley flake/seedy bread and raw veggies.. forgot about brown pasta!) 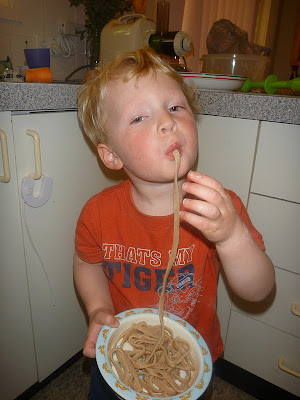 FOR THE FINALE:
The other firsts this month were... DS2 falling off the retaining wall in our new place. Fell onto concrete and miraculously was fine within 20mins! Dad has had more blood transfusions (which unfortunately isn't a first) and is on his second course of chemo.. worrying so I can't even write about it. I'm a Daddy's girl. x 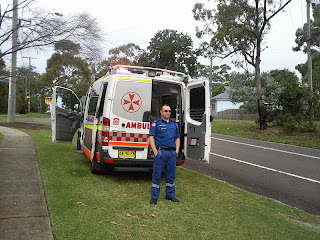 Our unparked car rolled down the drive (took an hour then we heard it!) and crashed into the bush taking out boulders and trees in it's path. We had four paramedics on scene (my husband and his co-worker to come and check it out plus his boss and station manager to open the bush trail gate for us with their special rescue key).
Must have been a sight for the neighbours!! Freaked out one guy coming to walk his two dogs on the track. He went pale and stuttered, "wa? ww. w. w. wah?"  hhahaaha  No-one was in the car, it was just a crush mess.
Posted by Suzi at 6:12 PM

Amazing stories! Hugs for you and your dad.

That is quite the lizard -- I guess it's a monitor? We had a pet iguana, pet water dragon, gecko, but that thing looks scary! Thanks for stopping by my blog.

Hi there Delia! Yes it's a lace monitor, it came up from the bush track (forest track) that we live opposite. Nice to have you visit.x