I got this pumpkin on holiday - yes, stopping at the roadside stall was the most exciting bit! There were lots of exciting bits I just love this stuff. 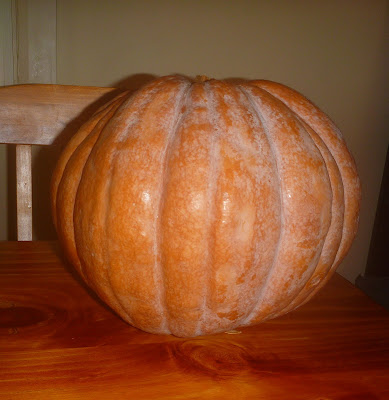 I baked some thinking it would be sweeter that way and I could make pies, pasties, soup and just eat it. Nope, no joy... blurgh!
I made some soup, onions, sweet potato, baked blurgh, chicken stock, curry spice mix and cinnamon. Then added coconut milk and a heck load of chopped coriander. It was so nice that DH took it to work!!! SHOCK!

My second try was a bit of a long shot. I'd seen a recipe for a brownie with a cheesecake swirl (I made pumpkin cheesecake swirl).. Anyway anyway, one was runnier than the other, didn't work out and I ended up just mixing them together and baking it. I topped it with the BROWNING SECRET RECIPE CHOCOLATE SAUCE.
It was chocolate overload (heaven for some of my friends) with secret vege ingredient. 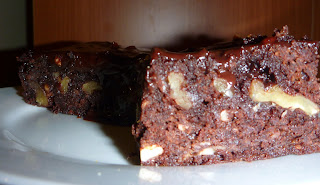 Bad bad picture, but this was all that was left after a day or so. Sooo fudging good! 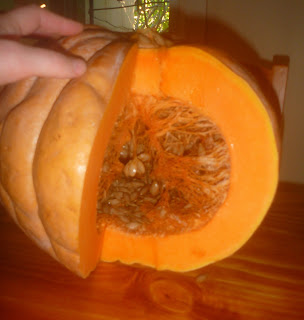 DS1 loves smooshing his hand in the remains and feeling all those slimy seeds. I think these will definately be toasted and eaten, not sown and grown!

Now I'm off to bake the rest and think of what to do with this whopper ham I have in the fridge. Reduced from $60 to $40! Slice it and freeze it?

Anyway, anyway, anyway, lemons are calling. Tree is ripening and I am loving it!! I'm dedicated to make lemon butter this year, already made lemon surprise pudding..
Posted by Suzi at 4:34 PM