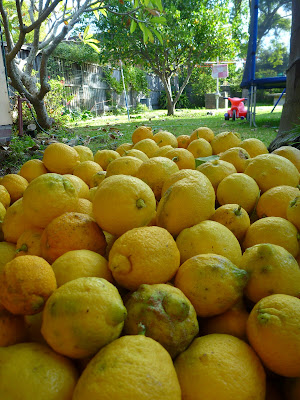 The thing about Winter in Australia is that there's nothing to look forward to, except Spring. In the northern hemisphere you have Christmas to fill you with things to do, family, excitement and tradition. It takes your mind off the cold.
In my house, we have the excitement and large task of LEMONS. Picking, juicing, zesting, making, baking.

My friend offered to get the ripe ones from the top. I asked DH for the ladder.. then it all went out of control. Asking for the ladder apparently was asking for "help" and a full tree strip.

These could have done with another two weeks of ripening and getting all juicy... no matter, they smell and taste DELICIOUS!! My cooking juices are already flowing and lemon cheesecake is first on the agenda. Well, I've already done lemon delicious (self saucing pudding).

I've been trying to find a way of preserving lemons without salt or alcohol....help?? 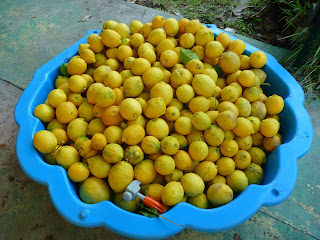 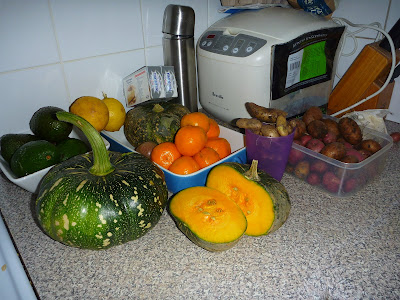 Today I love my kitchen. Apart from the fact that DH cleaned it up so well that now I have this itch to cook and mess it all up again - it contains lots of things from the garden. The pumpkins I grew MYSELF! YES THAT'S RIGHT!! I know they're not massive and there's only 3 (with one more on a vine yet to die) but they're mine! These will be nice and sweet when baked. Yu-um!

The spuds are mine too, a cup of kipfler minis and the rest are ruby reds. They re-grew from last year and I needed the space for spinach (next to the garlic) so out they came. 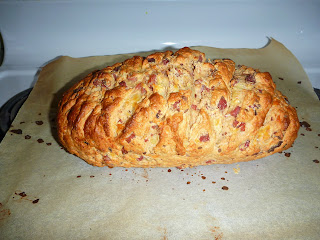 I really should move that bread maker. Since I got it I've been motivated to make more by hand and it turns out soooo much nicer :o)

This doesn't count as there's hardly any work involved in making this, it's ham and cheese damper that I LOVED and no-one else touched funnily enough. (??)

Recipe from What's for Dinner Mum?

All in all I'm loving feeling alive again, gardening and cooking.. from dirt to dinner. Ahh!
Posted by Suzi at 4:53 PM