It's been way too long since I last had anything to blog about "dirt to dinner" wise. I've been extremely busy with Norwex which has been great. The Sydney team is growing, the Central Coast team is new and doing really well. Now it's just my own area of Sydney that I need to work on!

Hubby's been off work for 6 months now with a back injury. He's on the mend but in the meantime I've done my best to kick up business and make it work for me. It's been surprisingly easy (though a lot of work) as people seem really really ready for a change from the extreeeemely expensive, high maintenance, relatively short lived and time consuming Enjo. I'm happy to say that ex-Enjo consultants and customers are now topping up with Norwex and LOVING it!

Anyway! Mon-Wed is DS2 time. I finally felt my old self a little after making pickled onions and experiencing organic raw milk for the first time. It's illegal to sell for consumption, so it's not sold for consumption... if you know what I mean. 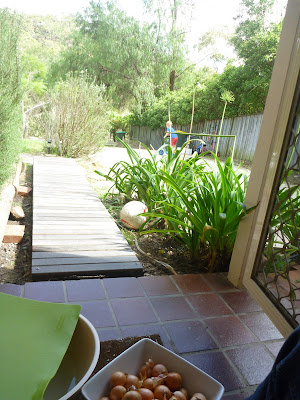 It was lovely to have a whole chunk of "watch me Mum!" time and peel then brine the onions.
The wooden walkway to the door above was finally upturned about a week after this pick. We found 37, yes, THIRTY SEVEN RED BACK SPIDERS - Argh!!! Squish, squish, squish!
Below is the gnome's cave. Isn't DS2 so cute :) Even at 4 he still has those soft curves. 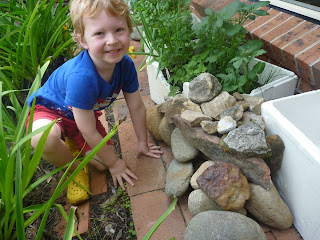 A massive jar of the almost ready product. (Thanks Mum for the spices) 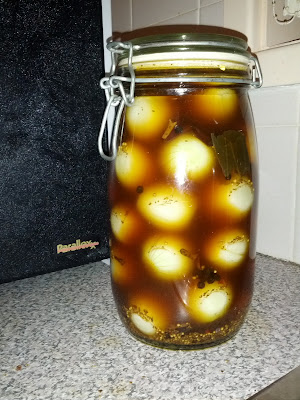 And below the raw milk. You can't really see in the pick the difference between the lite milk from the supermarket (right) and the raw stuff (left). There is so much cream in it! I must have had the stuff towards the end. Now how to find out a way of separating the milk and cream while it's fresh. 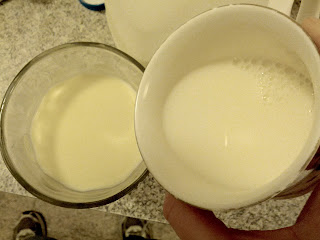 So if you're interested in organic raw milk (bathing, soap making.. or whatever) then let me know.
X