Well I know you've all been waiting for the unveiling of Jabba
(son of Fred) and here he/it is: 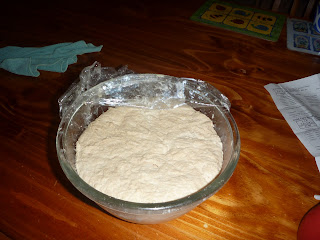 This is after two weeks of using and feeding my little pet. I have a couple of ladies at pilates and a bloke at church after a piece of Jabba so I'm having to up the feeds.
Below is the before pic. I'd just taken some to make the rabbit bread (below) found in the Good Life Bread Book (starring me and mum). I'd added the same weight of water to it and double of organic unbleached flour. Over night in the fridge and it turned puffy and light (above pic). 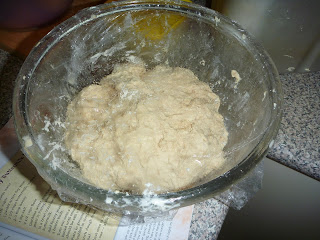 It's definately a hand smushing job. 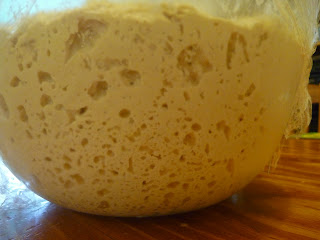 Side view of the over night rise pic. Nice and fluffy and stretchy. Done this way the starter only needs feeding once a week or even once a fortnight. 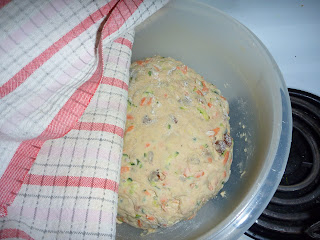 This is rabbit bread that I converted to a sourdough. I find it so much easier to use the water from a recipe and smush and dissolve as much of the starter as I can in that, then add all the other stuff. I used about 1/4 cup (heaped) of starter sponge.
Here we have 2 grated carrots, 1 large grated zucchini, 2 handfuls of sunflower seeds, 2 handfuls of sultanas and about a quarter of a cup of honey.
Totally went overboard from the original recipe  (1 of each and no zucc) and so glad I had!
Risen for about 6 hours and plopped into an oiled and floured tin for another 2. Hottest oven ever and some water tipped into a tray at the bottom and a quick spray of water on top and the oven door closed. Then turned down to 180 for about an hour. 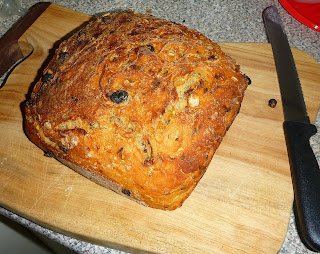 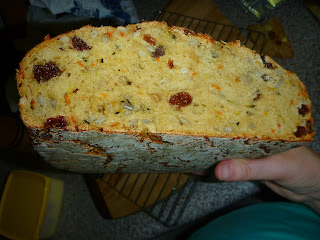 It looked rather unimpressive and dense. BUT once I cut into it I found a soft, moist (but not too moist) tasty bread. I cut the loaf in half then sliced ready for freezing.. didn't get to the freezer. 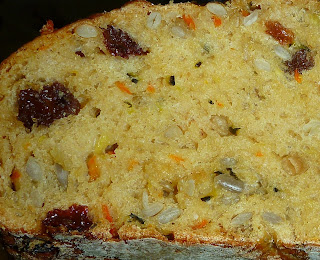 For the initial feed to the kids it had butter and honey drizzeld ontop. Then they didn't care about that.
Through our church meeting today they were like crazed and starved rabbits wanting their food.
The sunflower seeds and sultanas made such a difference and the smell of the sourdough was homely and actually sweet (not a honey kind of sweet).
My next experiment is a basic sourdough recipe that I'm proving over night. It's a cinnamon toast recipe made up my moi. 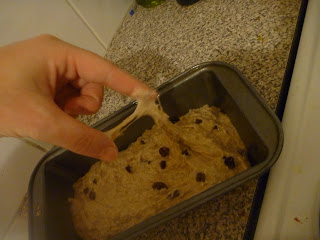 As you can see sourdough is alot wetter and stickier (actually so is french made bread Richard Bertinet's book is soooooo worth it. You'll never look at bread making the same again and you'll never knead as much or in the same way again.)
Ironically sitting over night to prove on top of my not so used bread maker and not so eaten loaf of shop bought bread :o) 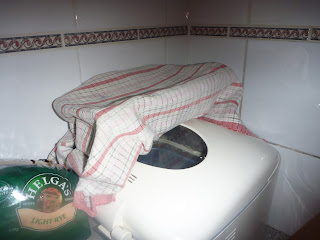 ACTUALLY on the subject of sourdough in the bread maker. I tweaked Richart Bertinet's
jam doughnut recipe to make it with a sourdough starter and it was GREAT. The regular recipe is still good to eat the next day if not sugared, whereas the sourdough version needs to be eaten straight away.
LOW GI HEAVEN!!!  I used Tasmanian raspberry jam made by Sam Sullivan's Grandma's fair hand to stuff inside and vanilla or cinnamon sugar on the outside. MUST re-do that one and take pics.
Here's the basic recipe. This recipe is bread machine friendly.
Posted by Suzi at 2:31 AM